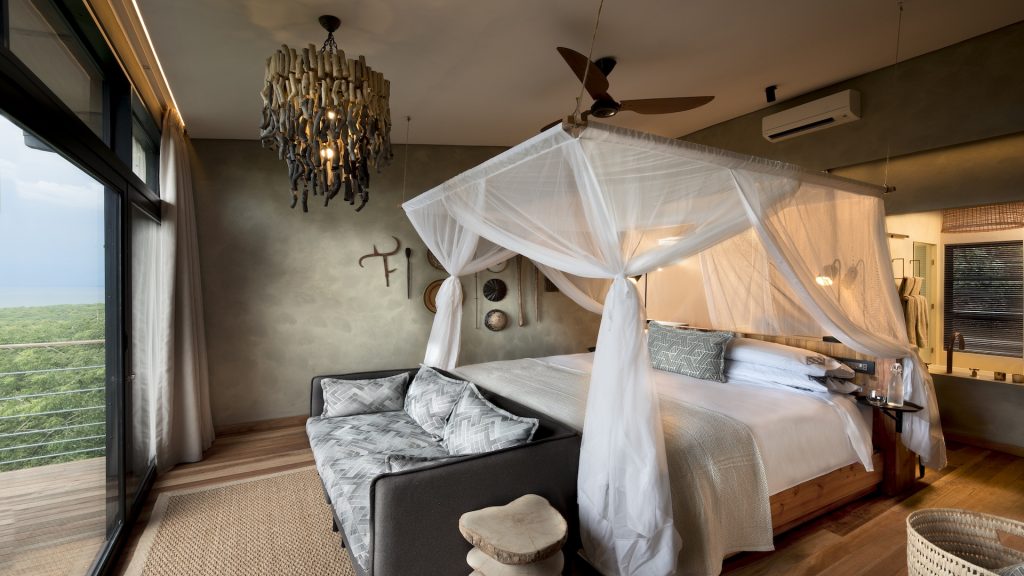 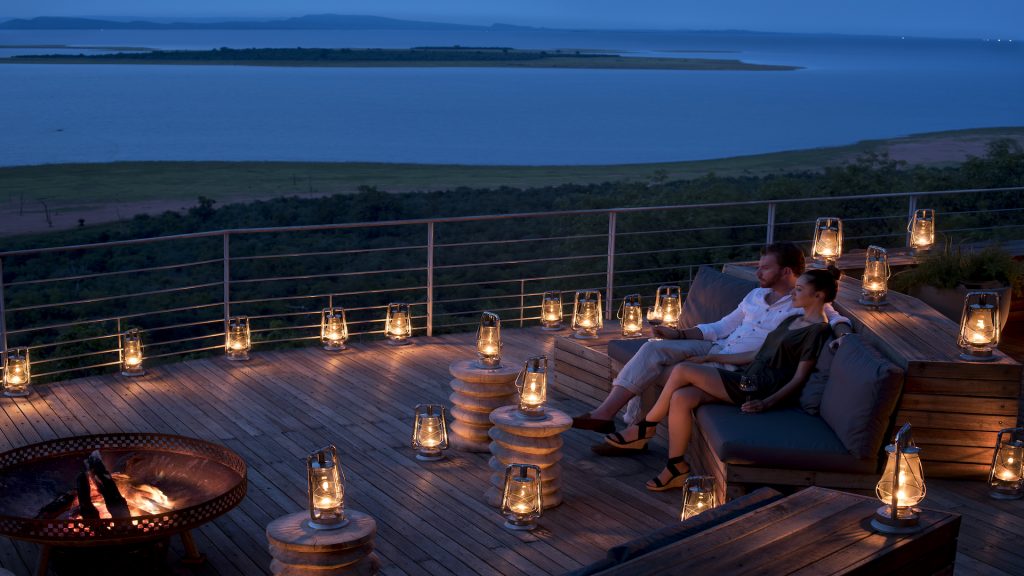 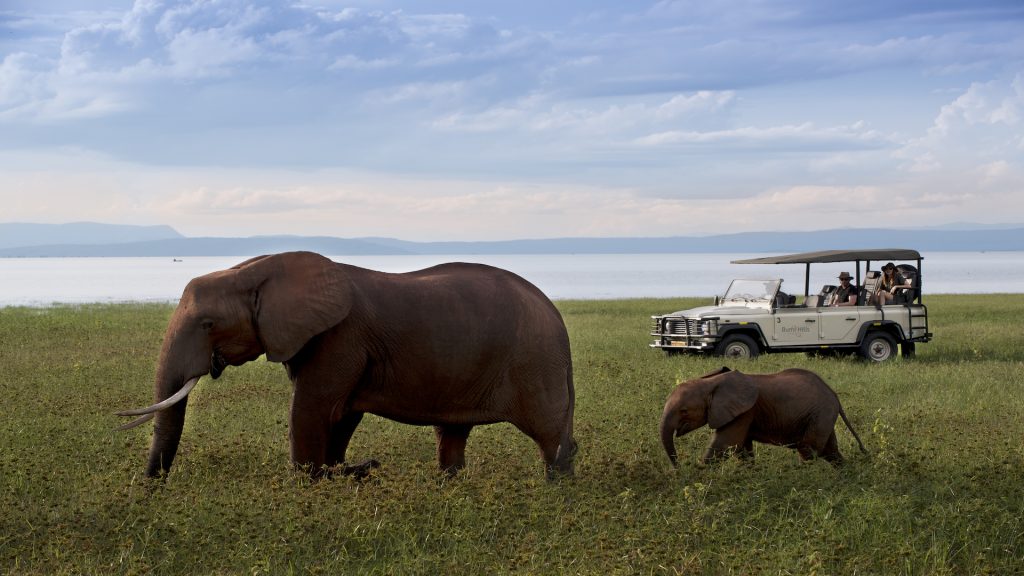 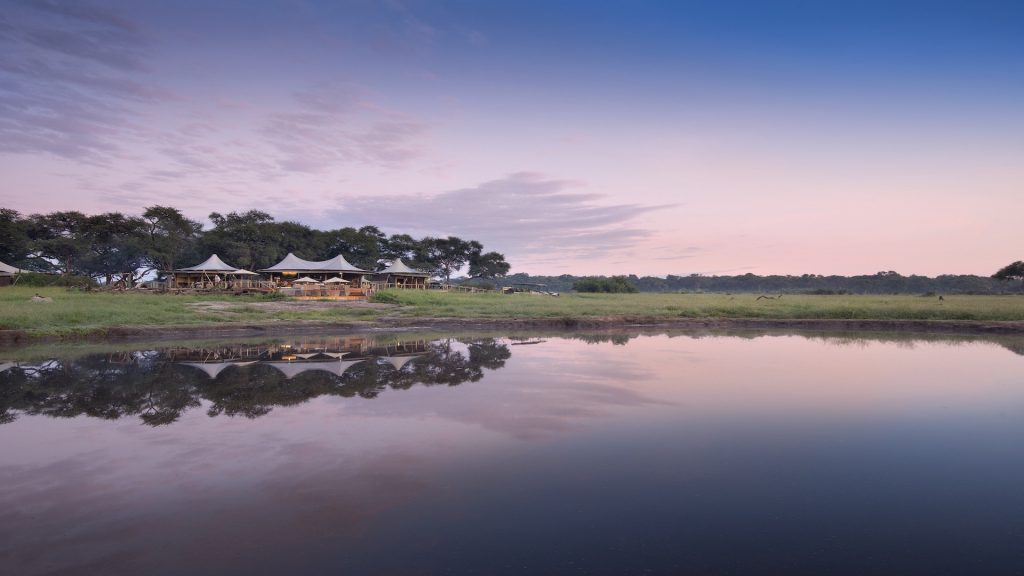 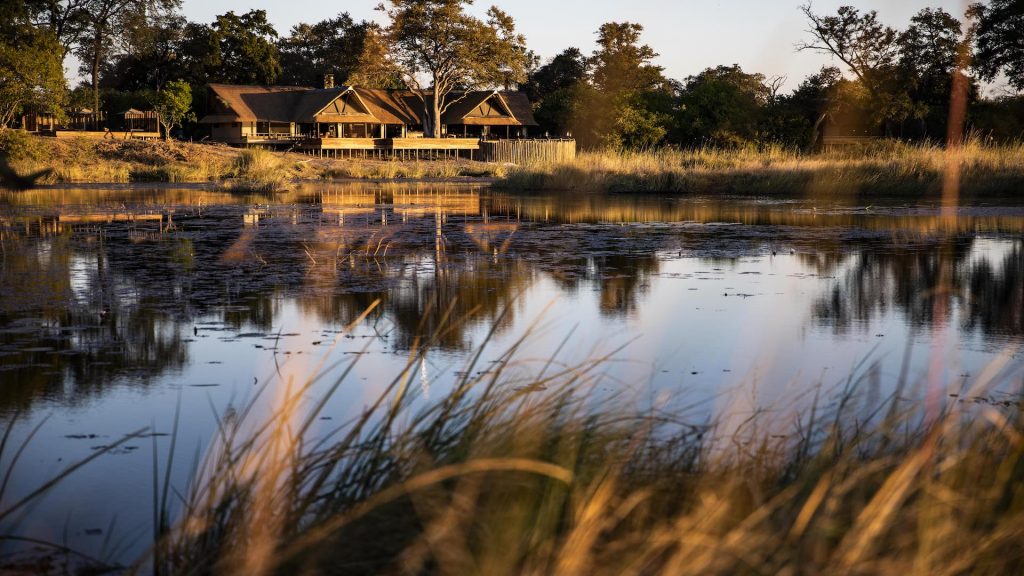 This is a mighty voyage exploring some of the best kept wilderness Africa has to offer as well as its most iconic and dramatic spots. Go with the flow, journeying from the magnificent Okavango Delta to the plummeting Victoria Falls, onward to Hwange National Park and beyond. Boat rides, thrilling game drives and exploring the stunning, undisturbed nature characterise this deep dive into Botswana, Zambia and Zimbabwe.

Your first destination is the inimitable Okavango Delta. Renowned for its diversity of wildlife, this massive river delta exists as a world of glimmering pools, channels, islands and lagoons that blend with one another in a stunning landscape unlike anywhere else on earth. This is the gem of Botswana.

The unique terrain here makes safari even more special – besides 4×4 game drives, traditional mokoro dugout canoes give you the experience of soundlessly gliding along the water to view animals on the banks and among the reeds. Feel a part of the delta as you paddle in the early morning sunlight to witness elephants drinking together.

Change the pace on game drives, where large numbers of lions and leopards give rise to electrifying predator action. Birdlife in the Okavango also thrives, promising an all-round animal extravaganza in this natural haven.

After three nights at the heart of the delta, you’ll head north to a private concession of the Linyanti Game Reserve. Your camp overlooks a stunning oxbow lagoon and, being situated close to an unfenced border with Chobe National Park, enjoys excellent wildlife sightings.

Linyanti is home to the Savuti Channel, a mysterious riverbed that dries up and flows for reasons that no one understands. It has been flowing since 2010 and the area is now a paradise of plant and animal life, drawing thrilling predator-prey contests. The park is also home to a vast elephant population, with these gentle giants hard to miss as they wander between the grass, woodlands and even camps.

Next, you’ll move to Zambia to descend on Africa’s adrenaline capital – Victoria Falls. As well as providing the dramatic backdrop for a host of daring activities like gorge swinging and bungee jumping, the falls are an important haven for wildlife and a beautiful, moving phenomenon. Nothing is quite like the sensation of standing before the earth’s largest falling sheet of water.

Take it in from above with a very special flight over the falls and its neighbouring landscape, before touching down to enjoy safari and river activities on the Zambezi and the national parks surrounding the area. There is also the opportunity to explore the fascinating Livingstone.

After two nights in Victoria Falls, your adventure takes you to Zimbabwe’s Hwange National Park. This park is the size of Belgium and has a greater diversity of mammal species than any other on earth. Explore the rolling grasslands and picturesque sunsets of the savannah here as you hunt for the big five and rarer species like wild dogs, roan and sable antelope. Feel the might of huge herds of elephants and enjoy the relative seclusion of this wildlife treasure trove.

Your final stop is one worth waiting for; Zimbabwe’s Lake Kariba and the Bumi Hills. This huge lake is a magnet for creatures large and small, with healthy fish and bird populations and large numbers of big game at its shores. It’s an excellent spot for fishing, but the surrounding private reserve also lends itself to excellent sightings on game drives and entertaining interpretive bush walks. It neighbours Matusadona, sharing a rich flow of wildlife.

Upon arrival at Maun Airport, a member of the andBeyond team will meet you and assist you onto your flight to Chitabe Airstrip. Your flight will take you over pristine views of the Okavango’s waterways. Touch down to begin your adventure at andBeyond Sandibe Okavango Safari Lodge.

The Okavango Delta is an oasis of life. Countless species thrive here, with many migrating during the dry season to avail of the rich water and plants in the area. The Big Five can all be found, with great prides of lions as well as high numbers of other big cats.

Besides game drives and guided walks exploring the Okavango’s wildlife, your stay includes a helicopter flight to the Tsodilo Hills, where the San bushmen lived for thousands of years until the late 20th century. Here a knowledgeable San guide will lead you through the ancient quartzite rocks and rock paintings that date back over 25,000 years. This is an energetic hike through a sacred place, viewed from a rare and valuable perspective. 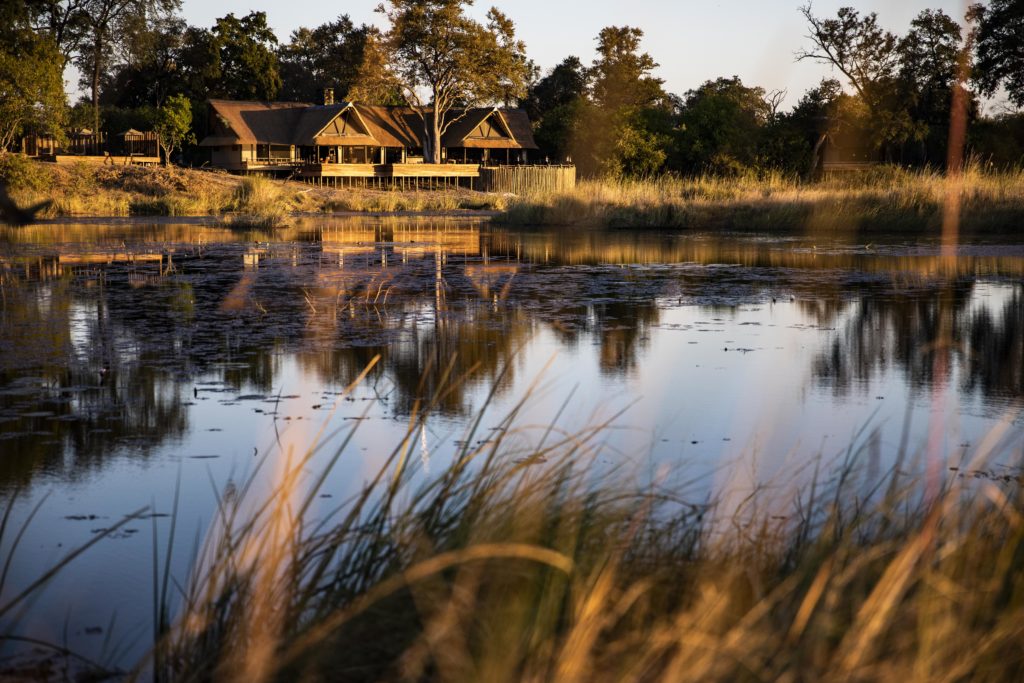 Take in a short game drive to Chitabe Airstrip, where you will be driven to Kings Pool Camp in a private concession of the Linyanti Wildlife Reserve.

Linyanti is a marvellous reserve, bordering Chobe within the vast natural corridor between Angola, Namibia, Zambia and Botswana. Rarer species, such as sable and roan antelope thrive in woodlands, which interweave open grassland and riverine forest to create a lush landscape. Huge herds of elephants characterise the area, as does incredible birding and the mysterious Savuti channel, which dries and flows of its own accord.

Embark on game drives both day and night on the concession, looking out for species like the lechwe, leopard, African fish-eagle, cheetah, giraffe and hippo. Guided walks are a must in this verdant location and allow guests to feel the bush beneath their feet as they adventure through the sights and sounds of the local flora and fauna. 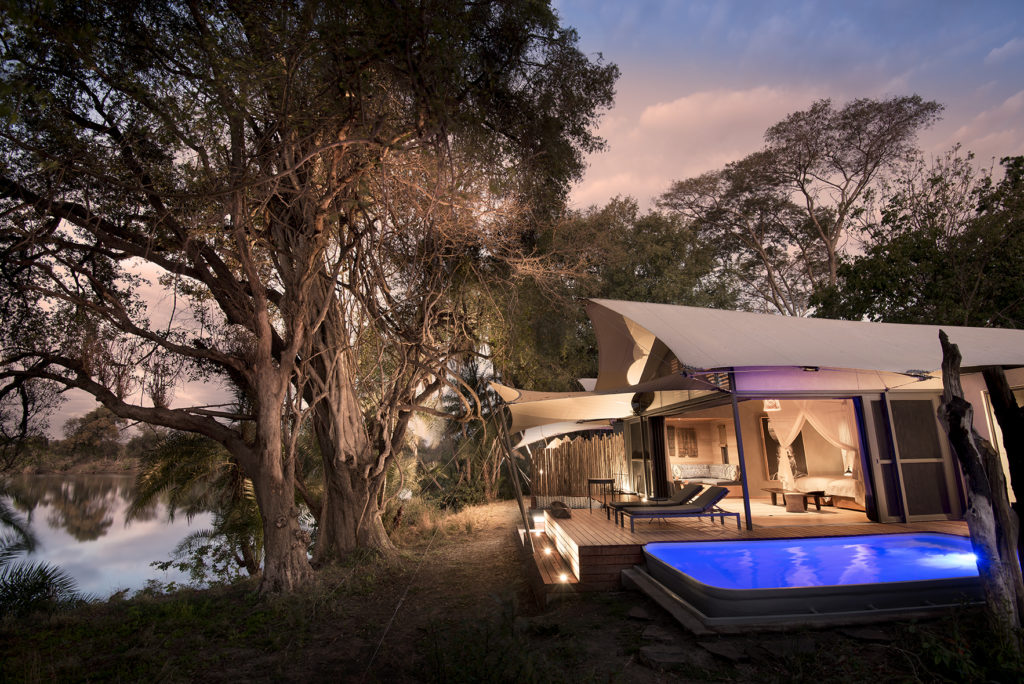 After a delightful breakfast, take a short game drive to Chobe Airstrip for your flight to Kasane Airport. Here an andBeyond team member will meet you and transfer you to Thorntree River Lodge. This involves clearing customs and immigration at the Botswana and Zambia border posts.

Let your senses come alive as you close in on the thundering of Victoria Falls. A tour takes you through the rainforest ecosystem that has grown at the foot of the falls before emerging beneath the roaring cascades – a sensation unlike any you’ve felt previously.

Take in the beauty of earth’s largest falling sheet of water from the sky, on a microlight flight that also takes in local villages, Batoka gorge, the Zambezi’s Rapid 26 and of course the precipitous falls themselves. A host of other adrenaline-fuelled activities make their home at Victoria – an unrivalled opportunity for thrill-seekers.

Besides the falls, the wealth of beauty and adventure of the Zambezi National Park is at your disposal. Set out on game drives in the Mosi-oa Tunya National Park, bush walks and rhino tracking as well as canoeing and river cruises accompanied by sunset cocktails. Catch and release fishing is an exciting way to spend an afternoon on the river. A host of cultural activities are also included, with a Simonga village visit, Livingstone Museum, and Maramba and Makuni market visits possible too. 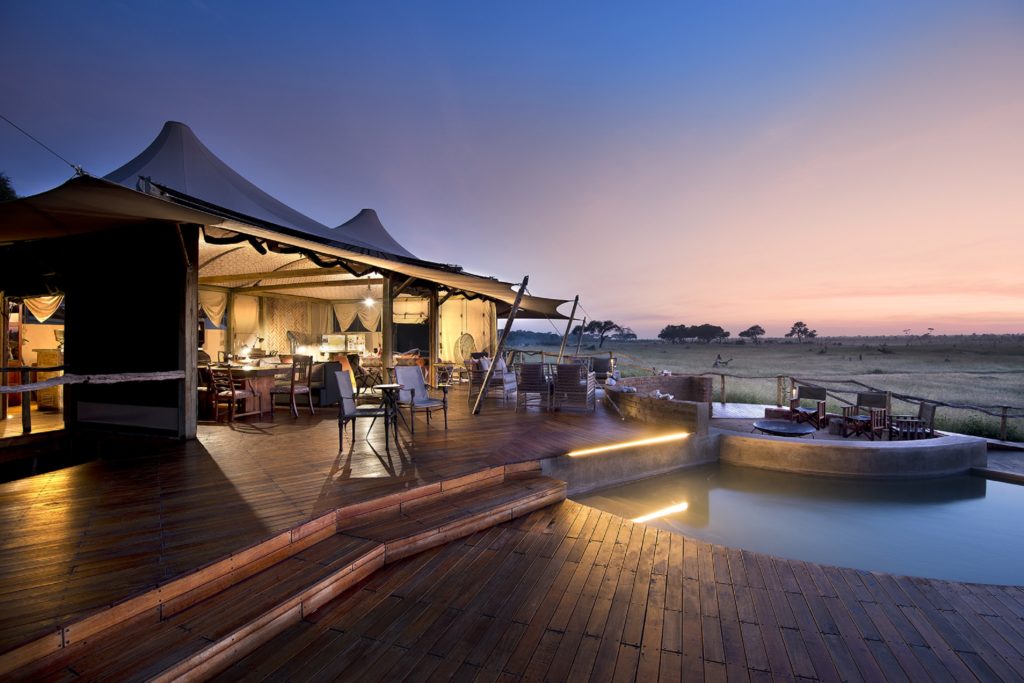 After breakfast you will be driven to Victoria Falls Airport, where you will fly to Hwange Airstrip. Here you will be greeted by a member of the andBeyond team and transferred to Somalisa Camp.

Welcome to Zimbabwe’s largest national park, home of Africa’s biggest elephant population. Enjoy the beauty of the floodplain where your camp is situated, where emerald grass and mirror-like pools catch the midday sun. Amongst the more famous safari wildlife, there are also gemsbok, roan antelope, cape wild dogs and white rhino that make their home at Hwange. Your stay includes game drives, guided bush walks and cultural visits to local villages. 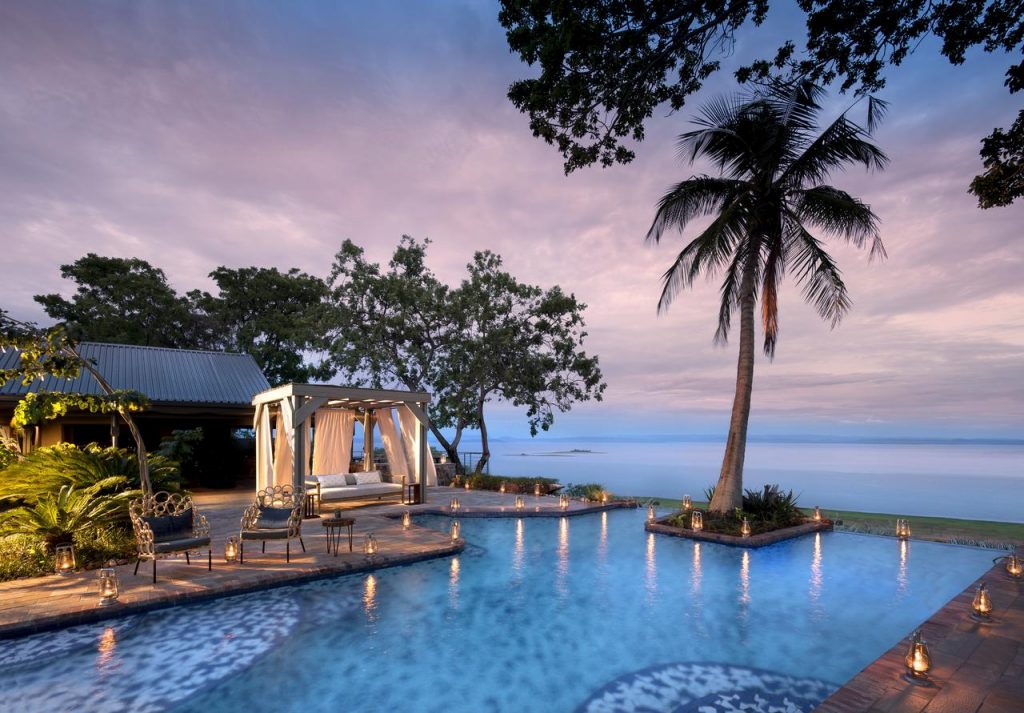 After breakfast you will be transferred to Hwange Airstrip for your flight to Bumi Hills Airstrip. Your home for the following two nights will be the magnificent Bumi Hills Safari Lodge.

The Bumi Hills are your camp’s namesake and where the lodge is perched, overlooking the tremendous Lake Kariba below. The lake was built and filled between 1958 and 1963, stretches over more than 5,000 square kilometres and is now home to a rich diversity of wildlife, including myriad fish, crocodiles, hippopotamus, fish eagles and other birds and lions, elephant and other big game at the shores.

This is a fantastic spot for fishing, but adventures also include game drives, bush walks, game viewing in hides and romantic sundowner cruises. The private concession here lies beside the Matusadona, and wildlife roam freely between the two parks, allowing a broad range of encounters while out on safari.

After a final tasty breakfast, we bid farewell and you will be transferred to Bumi Hills Airstrip for your flight to Robert Gabriel Mugabe Airport, where you will arrive in time for your onward travel arrangements.

One of Africa’s seven natural wonders and a UNESCO world heritage site, the Okavango Delta is the sprawling mass of marshes, islands, channels and lagoons formed where the Okavango flows into the Kalahari basin. More than 200,000 animals migrate here from July to September, a true oasis of wildlife in the summer heat. It promises one of the richest safari experiences on earth, boasting animals from the Big Five to Nile crocodiles to abundant African wild dogs and white rhinoceros. Thousands of plant species and over 500 bird species thrive.

The Zambezi River is nearly two kilometres wide at Victoria Falls.  The gorges down which the river tumbles are home to several species of endangered and migratory bird species. The stunning iridescent mist created by the plummeting water can be seen from more than 20 kilometres away and gives rise to the delicately balanced rainforest-like ecosystem at the foot of the waterfall.

African Bush Camps (Thorntree River Lodge, Somalisa Camp and Bumi Hills Safari Lodge) dedicate themselves to holistic experiences that centre visitors and their interests. They have a dedicated and highly experienced team of guides. The African Bush Foundation is a non-profit that is committed to empowering the communities with which African Bush Camps work and conserving the areas in which they operate. Community empowerment initiatives, such as the Mola Wildlife Coexistence Programme, conservation projects and investment in education make up just some of the work they do.

The minimum age at Somalisa Camp is 7. At King's Pool Camp, 6 - 12 year olds may only participate on privately booked activities and those under 16 must share a room with an adult.