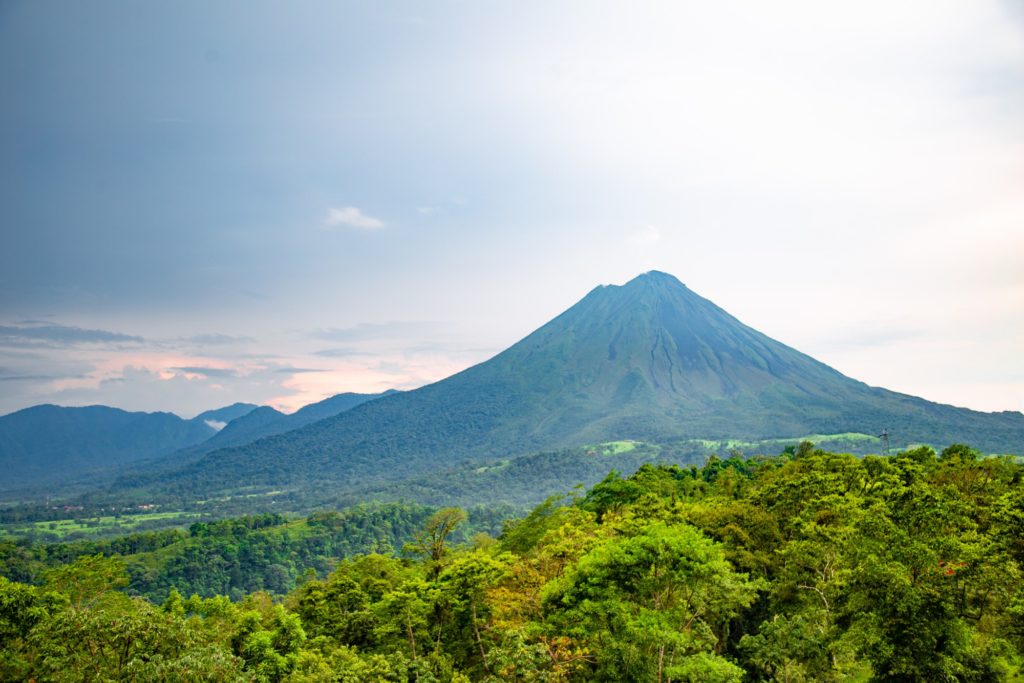 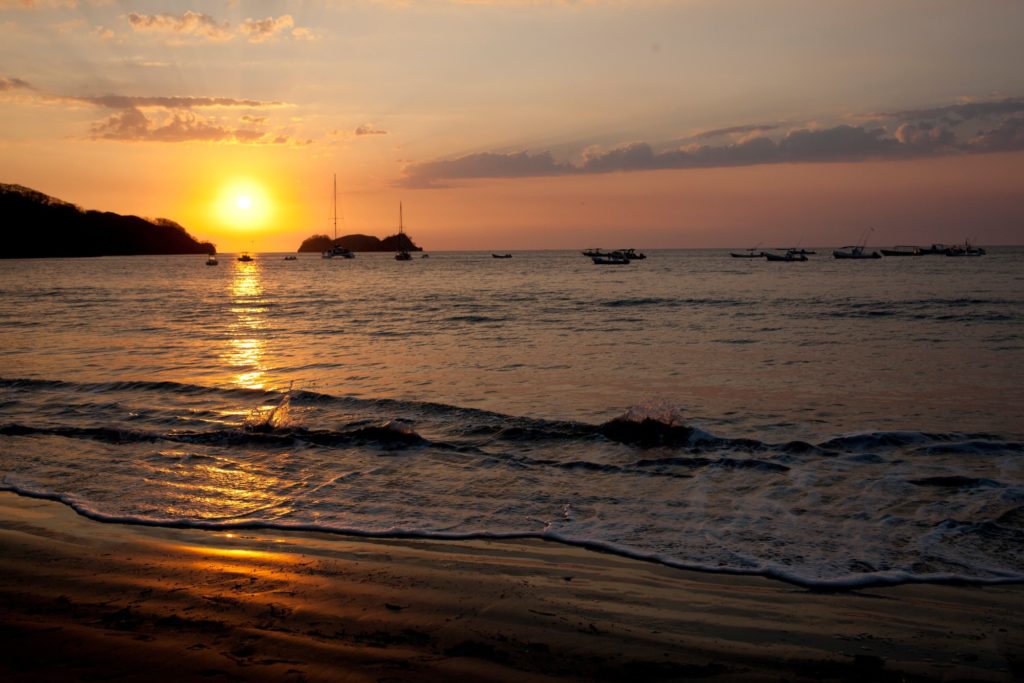 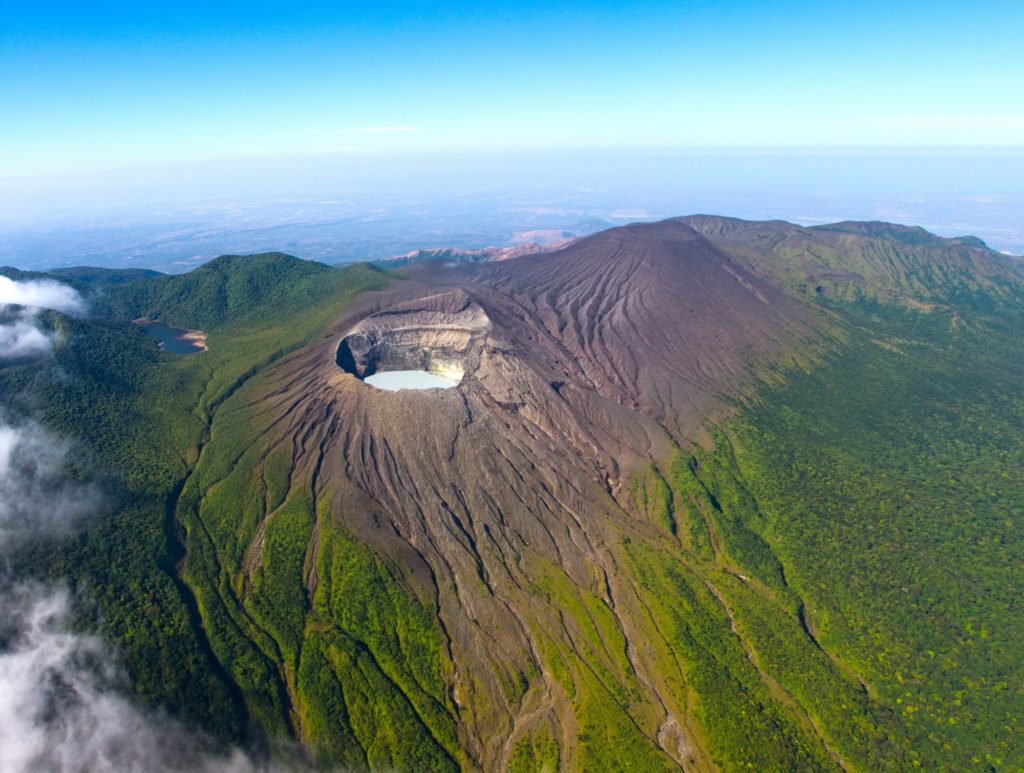 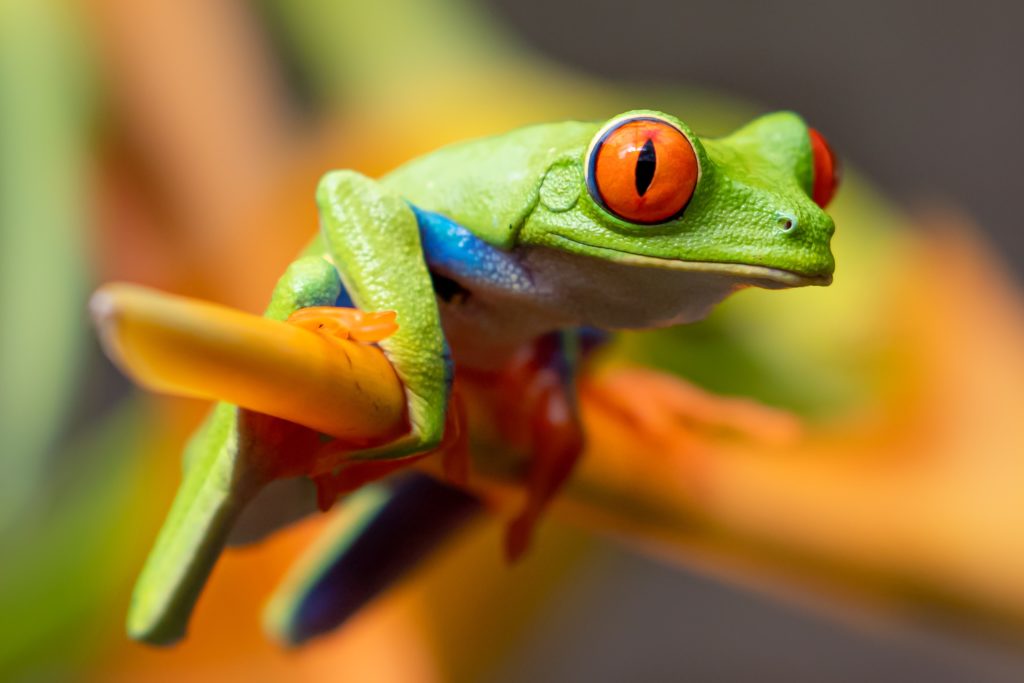 Explore on your own the great diversity of Costa Rica’s National Wildlife in the northern part of the country, in a remote region named Boca Tapada, surrounded by rivers and wonderful forests. Admire the perfect cone of Arenal Volcano and hike through the Rincon de la Vieja National Park, passing by hot muds and fumaroles. Chill out at the tranquil beaches of Santa Teresa, experience the authentic lifestyle and enjoy the breathtaking views from Chayote Lodge.

Breathe in the pure fresh air of the rainforest and enjoy the solitude of an isolated beach while the sound of the surf brings a sense of freedom and relaxation. Costa Rica’s great outdoors and all the activities you can enjoy is the best opportunity to enjoy the planet in its purest way. Waterfalls and active volcanoes are just part of what you will experience during this journey.

After arriving at Juan Santamaria International Airport (SJO), a representative will meet and greet you, providing you with some information and travelling tips as per your visit. Afterwards, you will be transferred to the rent a car station, where you will be provided with a 4×4 car. From here on you will be free to drive to the different areas set on the itinerary, starting with the Central Mountain Range. This drive will take approximately one hour, and will offer you a first look at the diversity that the country has to offer, including the beautiful Naranjo Coffee Plantations. 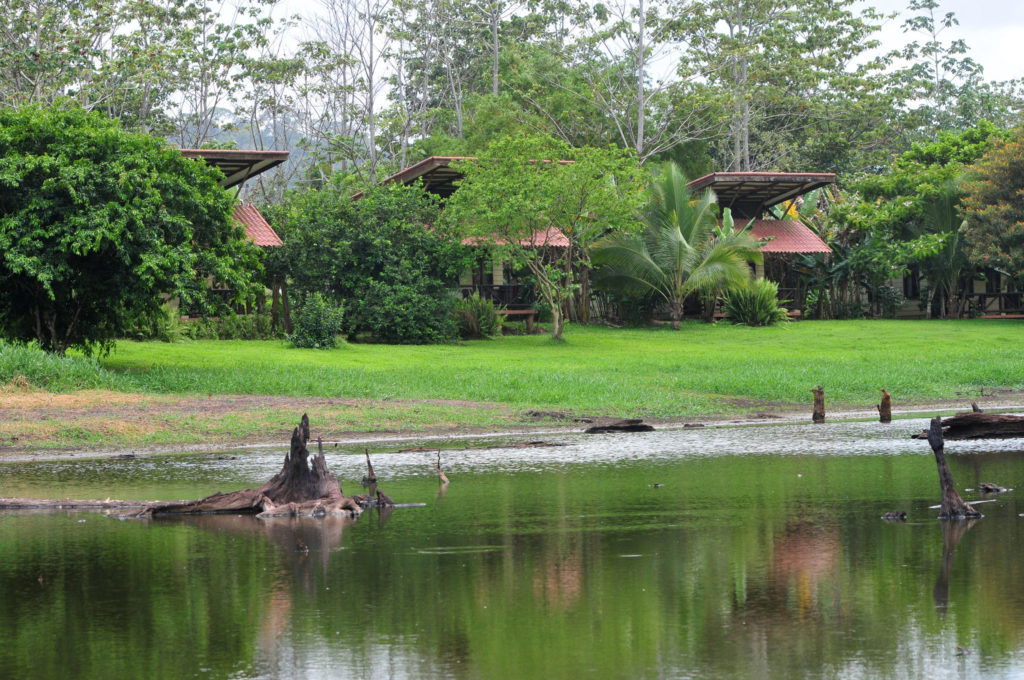 The driving experience today takes you to the Northern region and plains of Costa Rica north of Pital de San Carlos, specifically to the Boca Tapa de San Carlos. Maquenque Lodge will be your home for the following two nights. This area is known for its ecology, wildlife observation, and unique birding which is all surrounded by tropical rainforests and bordering the majestic San Carlos River.

The next day, you are at your leisure to explore the wonders of this area on your own. A boat tour on the San Carlos River, Walking Tours, horseback riding or a night tour are all part of the optional (extra cost) activities in the area. 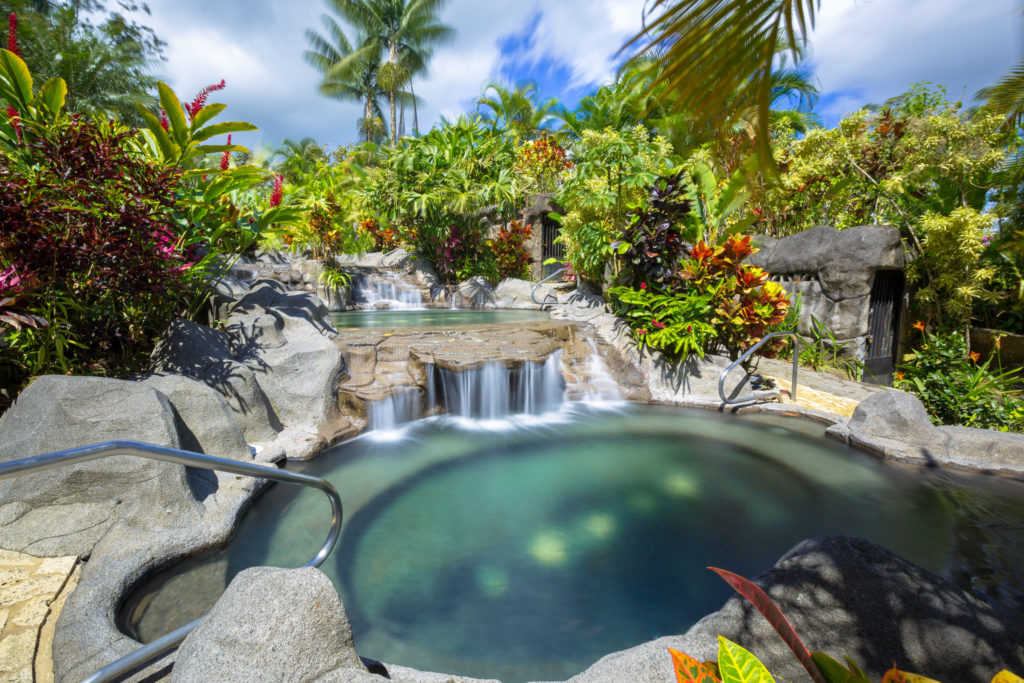 After breakfast, you will be making your way to the Arenal – Fortuna area, home of the famous Arenal Volcano. The drive from Celeste River to the Arenal Volcano area is relatively short, and you can take it at your own speed to admire the scenery as you go along the different plantations. You will experience a two-night stay at a hotel in the Arenal volcano area.

This area represents the countryside of our towns. These lands are dedicated to agriculture and cattle ranches that become what many people have called the heart of the country. The main attraction of this area is by far the Arenal Volcano, which rises 1,633 meters above sea level showing off its almost perfect conic shape.

The following day is at leisure for you to discover on your own the different attractions, which are available in this area.  At an additional cost, you might go hiking in the Arenal National Park, Hanging Bridges, Canopy, and horseback riding or relaxing at the hot springs. 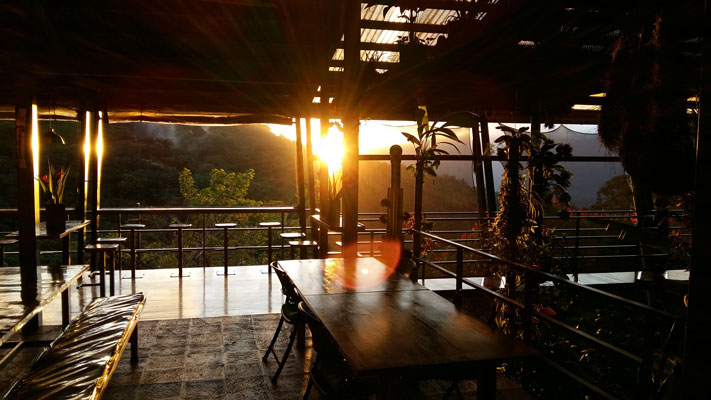 Today you will drive to Rio Celeste (Light Blue River), located near the Tenorio Volcano National Park. Undoubtedly, as the name says, Rio Celeste is a natural wonder of Costa Rica. This river obtains its spectacular colour from different volcanic minerals. Local legend says that when God finished painting heaven, he washed the brush in the Rio Celeste! Surely, this will be one of the highlights of your trip to Costa Rica.

The next morning we recommend getting up early so you walk on your own to Celeste River at mid-morning, and spend a couple of hours admiring the imposing waterfall, look-out point and blue lagoon, as well as explore the trails that take you to the “Teñideros,” where the river takes its blue colour from merging with a small creek. Visit the Bijagua village and get to know the locals; this is near the lodge in which you are staying. Alternatively, you can simply relax at the lodge surrounded by wonderful nature. Today you will continue towards Rincon de la Vieja, Guanacaste’s largest and most active volcano. The first stage of the route is full of beautiful panoramic views of the largest lake in the country, Arenal Lake, which is used for power generation. Continuing with the trip, you can see in the distance the Tenorio and Miravalles volcanoes, when passing through towns like Cañas, Bagaces and Liberia, before reaching the area of Rincon de la Vieja volcano. This area is famous for its cowboys and cattle breeding. Therefore, you can see open fields of dry grass for cattle grazing, along with landscapes of tropical dry forest, with a variety of wildlife.

The next day is at your leisure to enjoy the hotel facilities or consider taking an excursion (extra cost). We recommend that you visit Rincon de la Vieja National Park (closed on Mondays), where you can walk beside bubbling mud pools and sulfur fumaroles while exploring the trails in the tropical dry forest. When walking, a local guide will describe all the secrets of the ecosystem as well as point out animals such as monkeys, toucans, agoutis, and coatis, among others. The park was created to protect the flora, it has the largest existing population of the national flower, La Guaria Morada (Guariante skinerii), extensive wildlife, and watersheds around the area. Enjoy your morning at leisure, discovering this beautiful area and observing the different species of birds, mammals and the exuberant flora that surrounds the forest. Then, continue your drive to the Guanacaste on the North Pacific Coast. This route will provide you with panoramic views of Miravalles Volcano until you reach the Pan-American Highway, where you will begin to notice the transition from rainforest to the tropical dry forest that characterizes the entire Guanacaste Province. You will begin to see the beautiful, world-famous beaches of Costa Rica, set amidst the jungle landscape, as well as the magnificent sunsets, which will create indelible memories in your mind! Tonight, you will begin your 3-night stay in your selected hotel. Enjoy two full days at leisure to enjoy the hotel, the beach, and the surrounding area.

This is your last day in our country and after some unforgettable days of enjoying the Pacific Coast, you will drive to San Jose (approximate 3 ½ to 4½-hour drive depending on the location).  The car rental is not directly at the airport, but nearby. After returning the car, you will be taken to the airport for your international departing flight.

A representative will meet and greet you upon your arrival and will provide you with all the necessary documentation you will need during your trip, itinerary and the main contact information and phone numbers in case further assistance is required.
Banks and Money?
There is an ample selection of state-owned and privately held banks in San Jose, and throughout the country. The official currency of Costa Rica is the colon; however, US dollars are widely accepted. US dollars and traveller's checks can be changed in banks and hotels. Most major credit cards are widely accepted, and cash advances can be obtained at banks around the country and in a variety of places throughout San Jose.
Electricity?
Ninety-seven percent of the national territory has electrical service. The voltage in residential areas is 110B\V 60 HZ (the same as the United States and Canada) is the standard in Costa Rica
Internet Access?
Costa Rica has a relatively modern telecommunication infrastructure and has the second-highest internet coverage in Latin America. Most of the hotels offer WIFI without cost; Internet speed may vary from 1MB to 10 MB. Visitors can easily buy a SIM card for a smartphone and have internet access and a local number at a very reasonable price.
Time Zone
GMT/UTC -6. Costa Rica is in the Central time zone.
Food and Drink?
Costa Rican cuisine is relatively bland compared to other countries in Latin America and the Caribbean. However, eating and drinking in areas frequented by tourists is generally safe. Costa Rica's concern for food safety also makes it an ideal location to sample the wide variety of tropical fruits that are available throughout the year. The prices could vary according to the destination and would be between $15 and $30.
What to drink?
Coffee of course! Refrescos or simply frescos are beverages made from fresh fruit (cas, guayaba/guava, sandia/watermelon, mora/blackberry, fresa/strawberry, piña/pineapple, papaya), sugar and either water or milk (depending on the fruit). Horchata - A cornmeal drink flavoured with cinnamon Guaro - the national firewater drank by the shot! Café Rica - A locally made coffee liqueur
What to eat?
The Gallo pinto - traditionally served at breakfast, is a mixture of rice and beans with a little cilantro, onion, red pepper thrown in, do not forget to ask for the secret ingredient: Salsa Lizano Casado, which means married, is the typical lunch in Costa Rica, containing rice and beans with meat, chicken or fish, always served with salad and fried plantain Arreglados - Puff pastries filled with beef, chicken or cheese Sopa negra - Black bean soup with a poached egg Empanadas – Are usually made of a corn dough that can be filled with anything: chicken, beef, beans, pork, potatoes. You can find sweet versions. Ceviche - Seafood marinated in a lemon, onion, sweet red pepper, garlic and coriander sauce Potacones - A great snack found on the Caribbean coast. Fried plantains and usually served with refried beans and guacamole. Flan - A cold caramel custard Mazamorra - A pudding made from cornstarch
Local Taxes & Tips?
Taxes account for 13% of the purchase and are always included in the final price. In restaurants and hotels, taxes and services are included in the final price; however, if you were happy with the service and would like to leave a gratuity, it would be welcome.