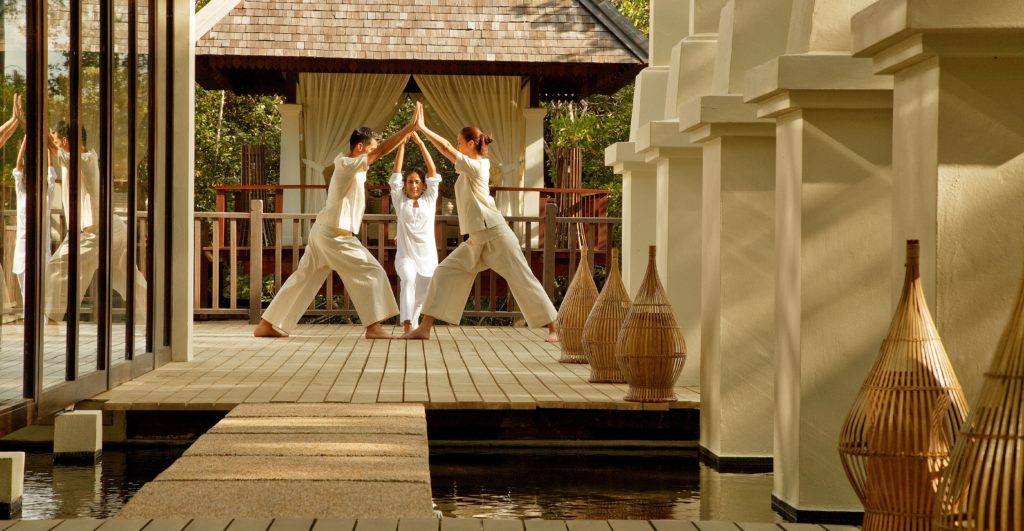 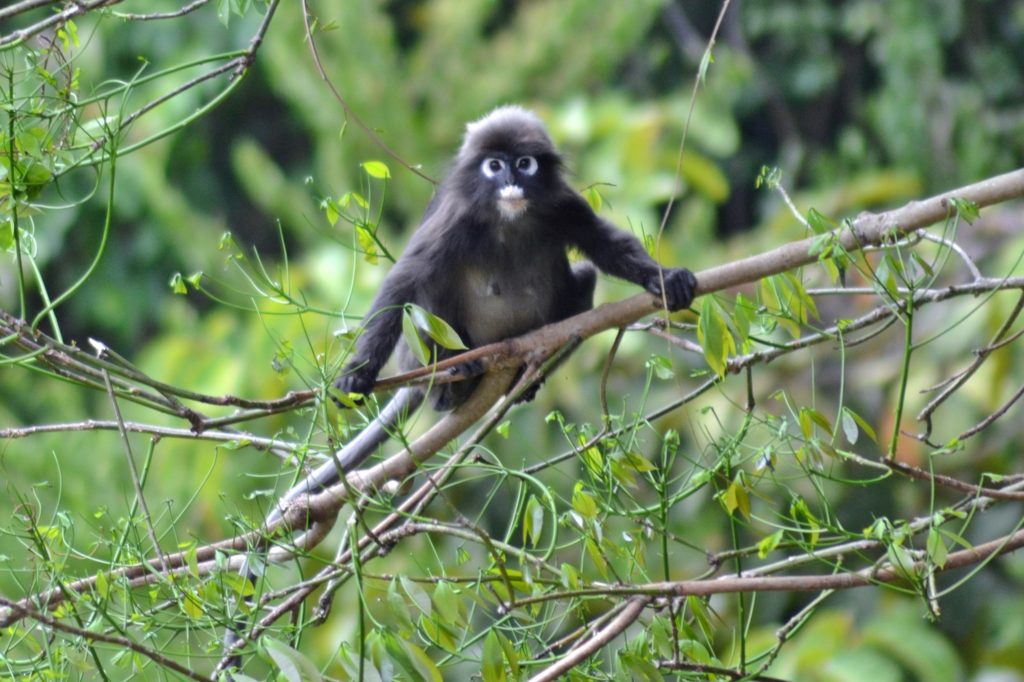 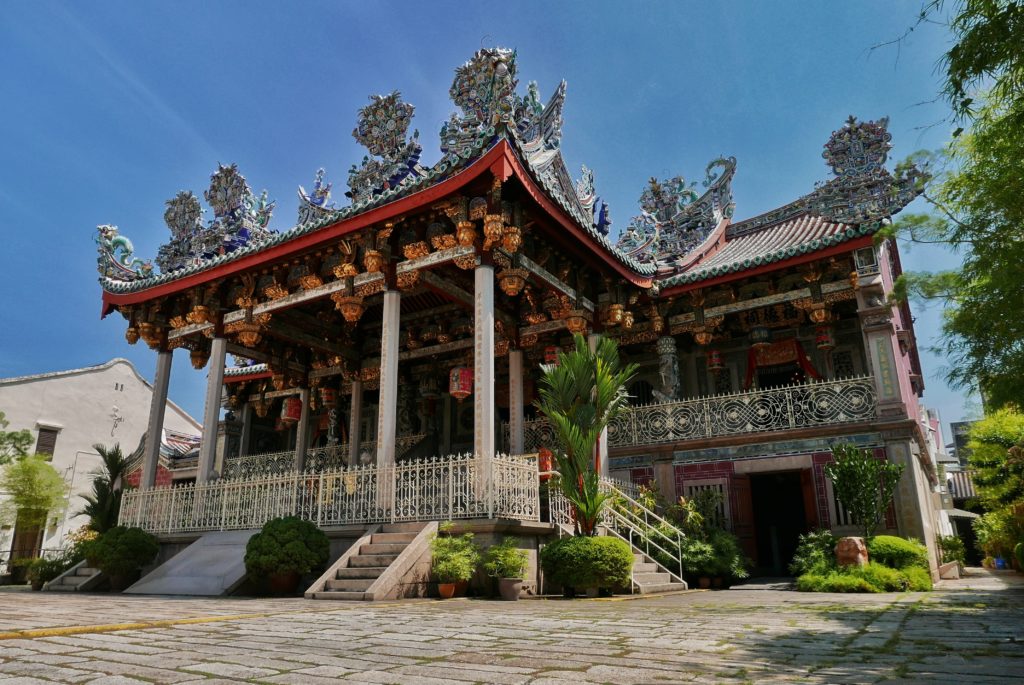 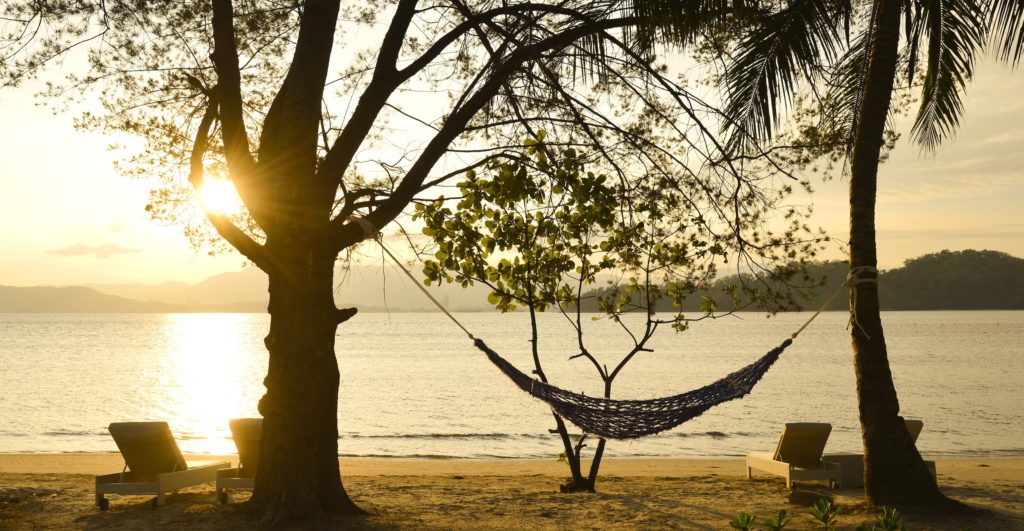 Explore the far East and enjoy a range of unique experiences with your significant other, from trekking through dense jungles to seeing some of the most endangered wildlife in Borneo, this trip will be one of the most memorable moments you and your partner will ever have. Before the end of the trip, delight in an island escape to the famous Gaya Island before heading back home to tell your family and friends of your epic adventures.

During your 14 day adventure, you’ll visit some of Malaysia’s most famous locations!

Malaysia’s capital is a true melting pot of cultures. Twenty-four-hour Indian ‘mamaks’ serve up hot roti next to Malay mosques, western ex-pats overindulge in trendy bars and shoppers hop between bustling Chinese markets and malls set amidst gleaming skyscrapers. The arts are thriving, museums are abundant, and the old world is carefully balanced against the new. Each facet of Kuala Lumpur’s kaleidoscopic society is connected to the next by an excellent public transportation system.

Kota Kinabalu is the capital of Sabah, a state in Malaysian Borneo. Compared to the Peninsular, East Malaysia is much more rural, thick with jungle and alive with wildlife. Kota Kinabalu itself is an interesting place to spend some time cruising seafood markets and sampling street food, but many travellers come here to head onwards to Mount Kinabalu and answer the call of the wild that lies just outside the city lines.

Danum Valley is a thick jungle that hosts one of the world’s most complex ecosystems within its dark canopy of tall, densely packed trees. There are various hiking trails to choose from, ranging in length and difficulty, as well as a treetop walkway. The foliage in the Tabin Wildlife Reserve is less dense, making it easier to see wildlife. Many of Tabin’s inhabitants are nocturnal, and a night safari can be an otherworldly experience.

The second longest river in Malaysia hosts one of the richest ecosystems in the world. The surrounding area is part of the Sukau-Kinabatangan Wildlife Sanctuary, home to rare animals like orangutans, proboscis monkeys, elephants, crocodiles and many bird species. This biodiversity is made possible in part by the wide range of habitats supported by the Kinabatangan River, from freshwater swamp forests to lakes, limestone caves, mangrove swamps and more.

Just half an hour away from the bustling city of Sandakan, Sepilok is a small village located next to the famous Kabili-Sepilok Forest Reserve. 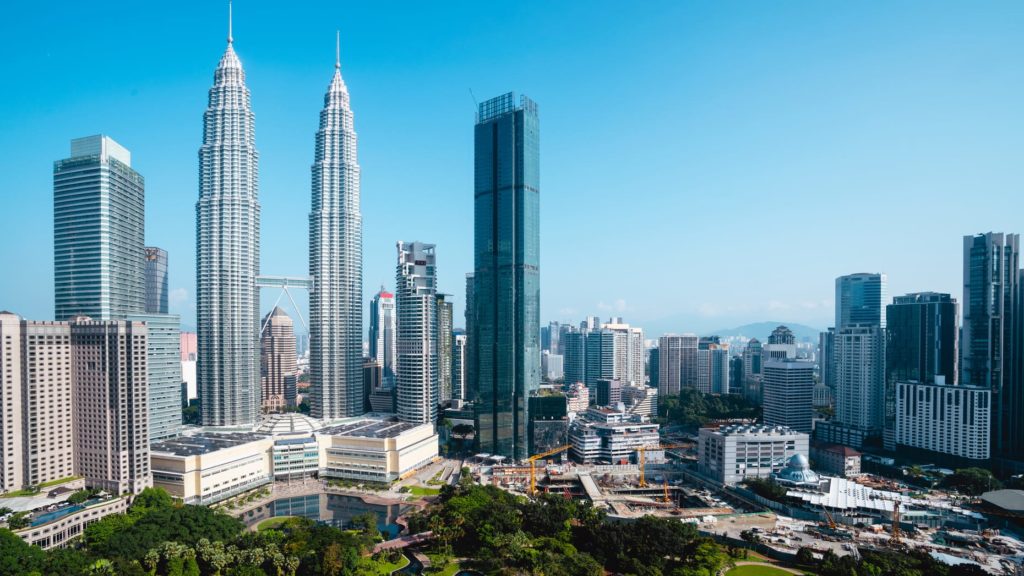 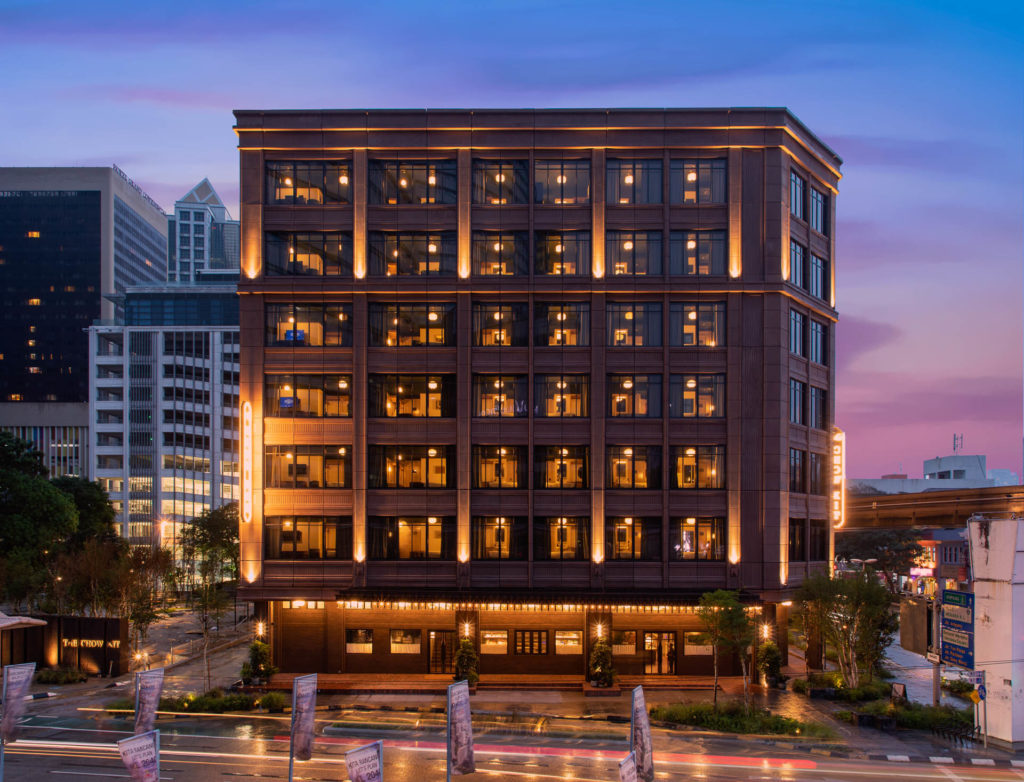 Upon arrival at Kuala Lumpur International Airport, you will be greeted by our driver who will transfer you directly to the city centre. The journey takes approximately 1 hour. You will be spending the next 3 nights at your chosen accommodation.

From Bukit Bintang Station, take the monorail up above the bustling streets of Kuala Lumpur to begin your day at the Sam Kow Tong Temple. Discover the secrets of the ‘Temple of Three Teachings’ and marvel at its location, squatting amongst skyscrapers, before enjoying a light breakfast in a local coffee shop. Walk on towards the KL central station to catch a train out of the city to the Batu Caves. One of Malaysia’s most important Hindu Temples lies within this impressive cave system where your expert guide will help you understand the religious roots of this diverse nation. After working up your appetite in the temples, it is time to hit the streets once more to find the nation’s lunch favourite, banana leaf food! Walk through one of the city’s busiest streets, Jalan Masjid India, lined with an array of colourful goods and foods before sitting down to your feast.

Important Information: Tour does not include hotel pick-up therefore you are required to arrange your own transportation to the meeting point which is at the Park Royal Kuala Lumpur hotel lobby.

Begin the day’s culinary adventures with a guided, early morning shopping trip to a local food market. Observe, listen to and take part in the frenzied bargaining, buying and selling of local produce. Absorb the valuable information on offer as your guide unravels the mysteries of the traditional, exotic and staple ingredients available, many of which, you will go on to use later in the day.

Before the cooking begins, indulge in a local breakfast of roti canai, tosei, capati or local cakes at your own leisure. Spend a couple of hours preparing a variety of traditional and festive Malay, Chinese, Indian and Thai dishes at a fully equipped cooking station, with detailed, expert guidance along the way.

Master Malaysian cooking etiquette, learn family recipe secrets and have fun in an atmospheric Malaysian homely setting without any washing up to do at the end.

A driver will pick you up and take you to the airport. Upon arrival at Sandakan Airport, you will be greeted by your driver who will transfer you directly to Sepilok. The journey takes approximately 20 minutes.

In the morning, head to Sepilok Orangutan Rehabilitation Centre. There, you will be treated to an enlightening video about the centre’s conservation efforts. Enjoy a ten-minute walk in the rainforest and witness the orangutans gather at the feeding platform before observing the younger orangutans over at the outdoor nursery. Afterwards, head to the Sun Bear Conservation Centre next door to learn more about the smallest bears in the world.

Depart for an estimated 2 hours of overland journey to the multi-award winning Sukau Rainforest Lodge where you will spend the next 2 nights. Enjoy a river cruise in search of Borneo’s wildlife and birds before returning to the lodge to savour a candlelit dinner on the pier, followed by a slide presentation and interpretation by a naturalist guide.

Rise and shine for the morning cruise up the Kinabatangan River to Kelenanap Oxbow Lake, where you will be able to view more birds and wildlife. After breakfast, join in the nature walk along the lodge’s Hornbill Boardwalk with the in-house naturalist. After lunch, you’ll be free to explore the area around the hotel and then in the afternoon, proceed onto another river cruise for more wildlife.

Feel free to explore the boardwalk at the back of our lodge at your own leisure. Lucky guests may even spot an orangutan among the treetops. Experience profound relaxation and comfort at Halia Spa at Sukau Rainforest Lodge, where you can enjoy an ‘escape from the ordinary’ with a blend of both traditional and modern spa treatments. 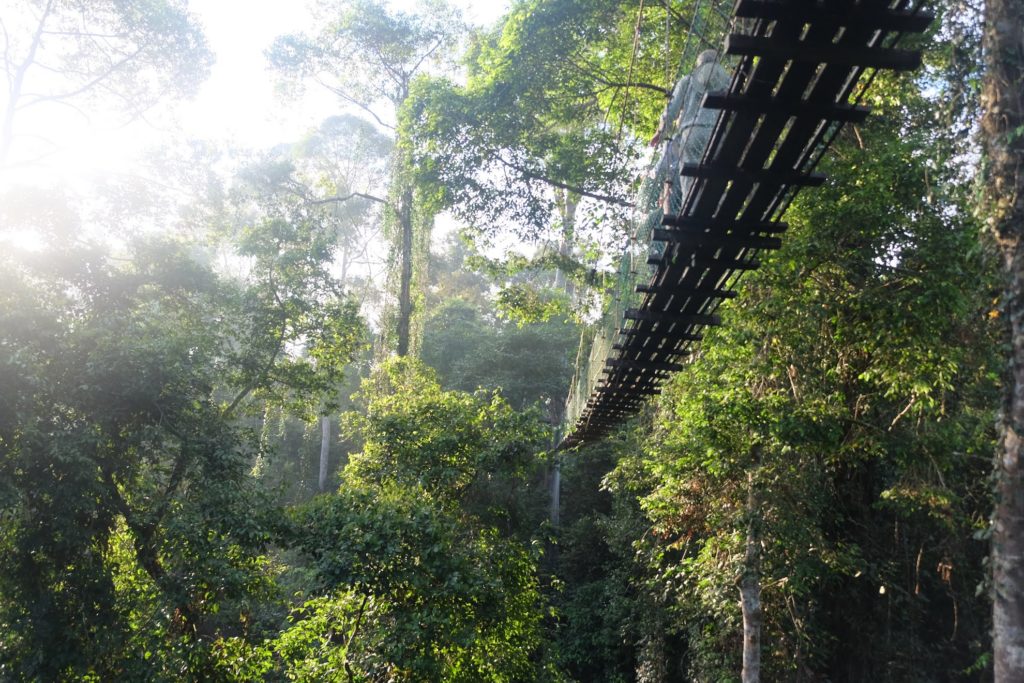 Enjoy breakfast before proceeding to Lahad Datu at 6.30 am. Upon your early morning arrival in Lahad Datu, you will meet your driver before making your way to the Borneo Nature Tours Office for your official registration and debriefing. At 9.30 am, you will make your way overland to the Borneo Rainforest Lodge where you will spend the next 2 nights in the largest protected area of lowland rainforest in Sabah, covering almost 43,800 hectares.

After dinner at the hotel, experience a night drive in an open-top vehicle to search for nocturnal animals moving around in their natural environment.

Stock up your energy levels with an early breakfast at the Lodge before trekking into the Danum Valley towards the Orang Sungai burial site. Soak up the historic and spiritual beauty of “Coffin Cliff” amongst traces of the ancient culture that once dwelled here. Ascend through the dense jungle canopy to the viewpoint and take in the astonishing birds-eye view of the surrounding area. Take a well-earned refreshing dip in the jacuzzi pool shortly followed by a replenishing lunch at the Lodge. Go your own way in the afternoon as you choose between land, on a jungle trail trek, or water, on a thrilling tubing ride down the Danum River.

Retreat to the Lodge for dinner in the evening and walk off the calories in the darkness with your guide as you join the nocturnal creatures in the jungle. 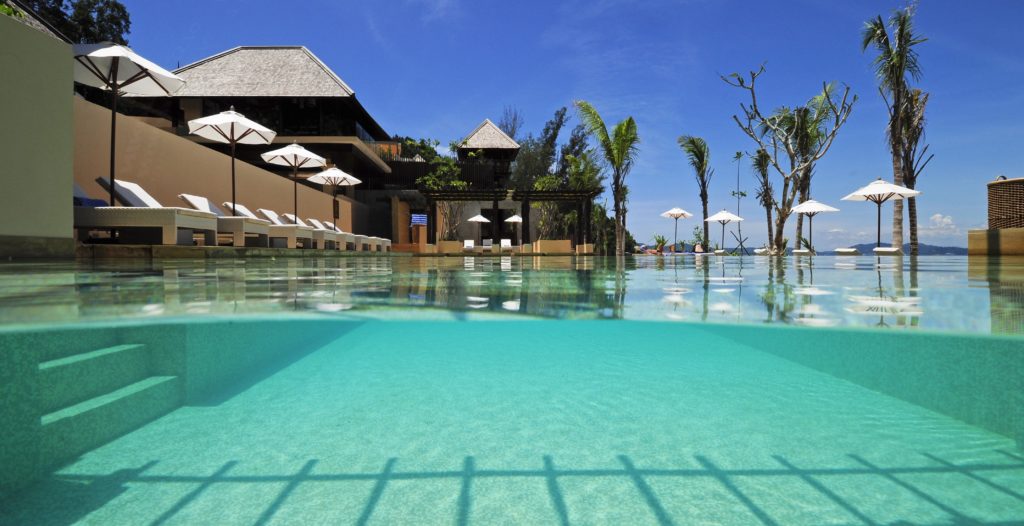 Prepare to leave this heavenly landscape that is Danum Valley behind, for now, as you settle into an early breakfast at the Lodge and spend the morning at your leisure. Trade wildlife snapshots with fellow guests, surrender to your slovenly side and snooze in bed or catch a final look around the picturesque Lodge grounds before lunch. Enjoy the drive on the narrow dirt trail back to Lahad Datu airport before boarding your early evening flight back to Kota Kinabalu.

Upon arrival at Kota Kinabalu Airport, you will be greeted by our driver who will transfer you directly to Jesselton Jetty. Here, the resort shared transfer boat will pick you up for a 15-minute ride to Gaya Island. You will then spend the next 5 nights at your chosen accommodation.

Spend your time in a state of utter bliss with a complimentary spa session and enjoy the peaceful environment around the spa centre. For adventure seekers, book a complimentary guided walk around the island in search of precious flora and wildlife. The friendly naturalist will introduce you to some of the tropical plants such as vines, looping rattans, palms, shrubs and massive hardwood trees.

The resort runs a conservation centre for marine life which is definitely worth a visit during your stay.

It’s time to say goodbye to this wonderful and spectacular Borneo Island. Our driver will pick you up and take you to the airport for your departure flight. 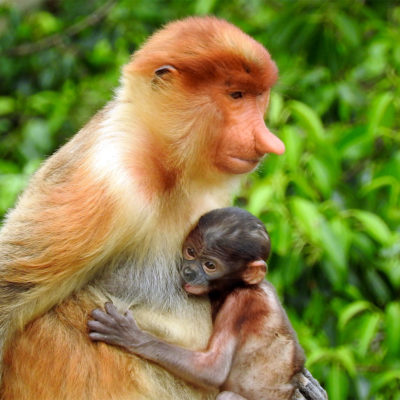 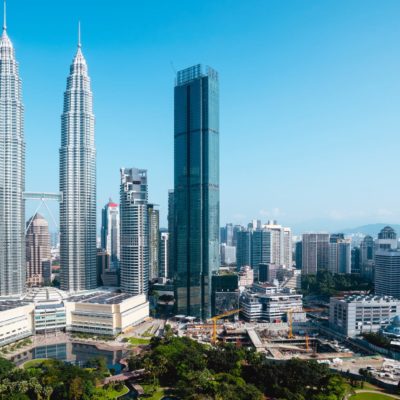 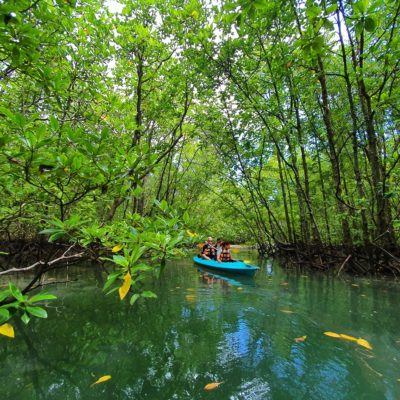